Do your users understand your app?

So your app was downloaded, yay! All your efforts, from development to marketing were appreciated, your install rate is rising, your app is going to be the next big thing, time to relax and bask in your glory, right?

That’s just a start. The number of users who installed or signed up to your app matters but it doesn’t necessarily say much about your success.What’s really important is the ratio between the number of installs and activeusers. It’s not the only important ASO factor but it’s especially crucial if your app is social in any way. Let’s take a look at Google+. Most of us has an account there, as Google forced us to sign up in order to use other Google applications But since not many people are actually active there, we don’t really care to share our lives on Google+. As much as we may dislike Facebook, it does what it’s supposed to do — connects us with friends. See what I mean?

What is the best way of getting new users?

Sure, approximately 60% apps are found through app store search so positioning your app to show up in the top results for your most important keywords is crucial but it’s definitely not all. Your most valuable users come from recommendations. Who will recommend your app? Users who downloaded it and loved it. If your users got lost in it or didn’t understand the purpose of your app, they’re probably not going to tell their friends about it. That’s pretty self-explanatory.

This is where on-boarding plays its role. If you let your users be after downloading your app, cause you’re sure it’s intuitive and so obvious what they should do, you’re probably gonna regret it real soon. Your app may be simple but it’s in your best interest to get your users on board and as a product owner it’s your responsibility to make sure they know what to do.
After all, who cares more about number of active users in your app, your potential users or you?
If they downloaded your app it probably means they wanted it but trust me, if you don’t push them to take the action and understand the benefits of your app they’re going to forget about it and uninstall your precious work and that also affects your app store positions in a really bad way.

How to make the perfect on-boarding experience?

1. Don’t assume users know. They may not know. In fact, they probably don’t :-) It doesn’t mean that you have to explain everything to them like they’re 5 years old and for sure don’t make them read lengthy explanations, show it to them and whenever it’s possible, push them to do it. This is the best way to learn. Of course your application is obvious to you, you spent months designing, building and testing it but but your users weren’t there when you came up with the idea of putting screens in this particular order and it may not be so obvious to them which button stands for what. Try to make this experience seamless and as simple as possible, not only for them to register easily but also to understand what your app does and how to use it in most efficient ways.

2. Don’t overwhelm. Give what’s needed and ask for what you need at the moment. Users don’t need to see all the features right away, they need to know your core feature, understand what problem it solves for them and what it the best way to use it. Basically, you need to make sure they know why they can’t live without your app any longer ;-) One common mistake apps make is not only giving too much information but also asking for too much. There’s an ongoing debate about whether it’s better to ask for permissions right when user opens the app for the first time, while they’re still in an installation mode or whether you should wait. I strongly believe that it’s better not to annoy users with too many requests, especially before knowing if they really want to use your app. If user wants to add a picture, it’s understandable that app will need permission to access the camera but if it’s a bank app and you ask for access to contacts list it may be bit confusing.

3. Watch your app being used. You have to start with guessing what will be the best way of on-boarding your users but there are plenty of ways to get it right, before you release your app. First of all, give it out to users. Start with your friends and family, ask for their feedback and most important — watch as they use your app. See where they’re clicking and find out when they hesitate. If you have to point them to anything when they first try it, you need to fix it. Remember that your regular users won’t be as determined to get to your app as your friends so any friction may cause them to drop it. On-boarding should be so simple, even not really tech savvy people can go through it without any problems. So did you show your mom what you’re working on? ;-)

4. Analytics and more analytics. What are the actions that most active users take? Once your app is released, analyse your users’ behaviour and try to tweak your app to push users through popular paths that lead to engagement. Keep in mind what Twitter did when they were in this situation — lots of downloads and not many active users. They found that most active users follow certain number of other Twitter users on their first visit. Now you know why Twitter forces you to follow some accounts before you can start using the app. Keep in mind that your interpretation of analytics may be wrong and the only way to get it right is to keep monitoring what’s going on. Sometimes your guess will be wrong and it’s okay! If you keep looking at your data, you will be able to catch these mistakes early on and iterate.

Not to bore you with full breakdowns of on-boarding process in different apps, I chose some great and not so great details of how it can be done.

A pretty new app that caused some commotion in last few weeks. On-boarding is not bad but take a look at connection between their claim and on-boarding process. 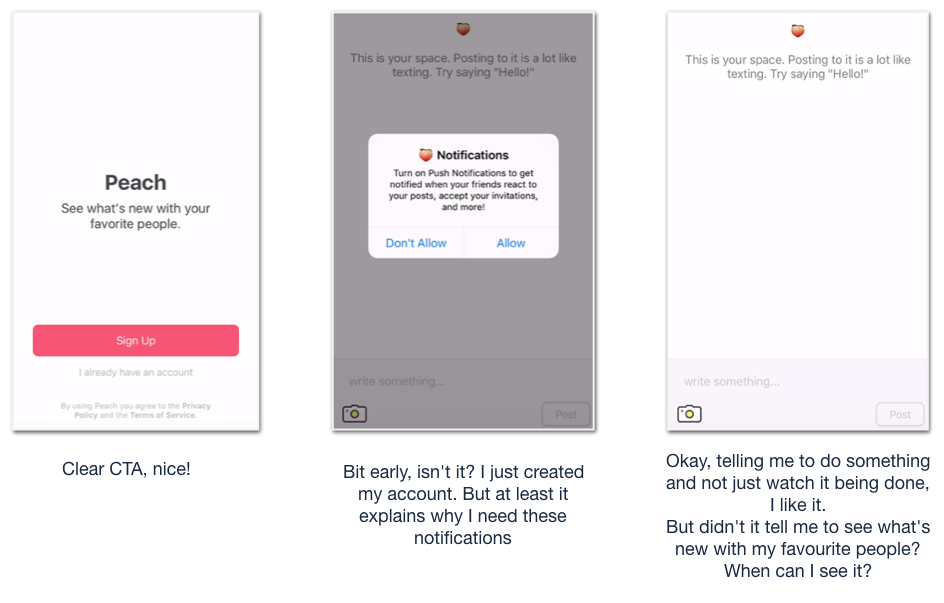 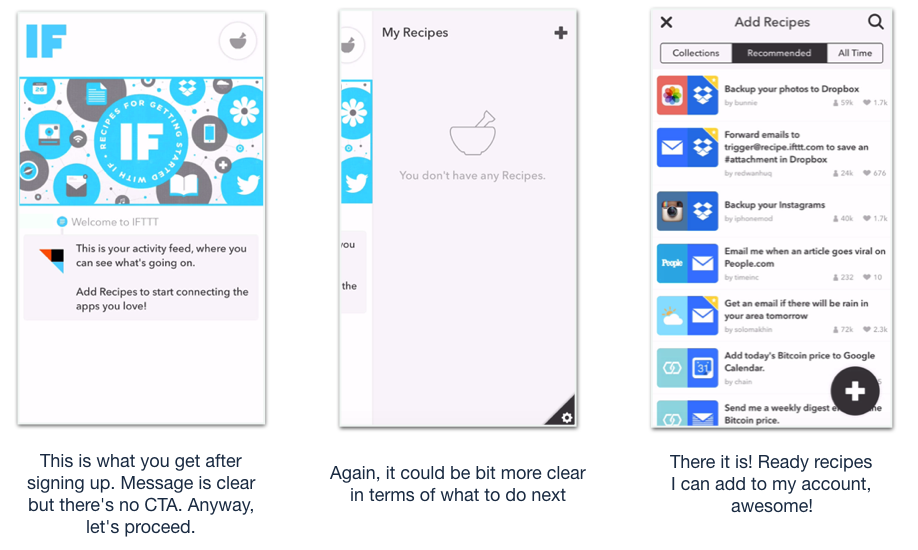 Let’s forget about the really long and complicated registration process, it actually makes users feel bit safer and in case of this app it makes sense.

It breaks my heart to see that the absolute champion of user on-boarding created this. Let’s see.

NO.
We believe that an app is more than just code. We believe it takes a holistic approach to get great results and be successful. We believe that if your on-boarding is bad, your app will get lost in the crowd. The quality of your app is as important as on-boarding and ASO (and vice versa) — neglecting one of these elements will affect the others. This is not about making users feel stupid, it’s about observing their actions to give them a great experience and understanding of your product.