From zero to hero. Why did I choose Android Development and would do it again

Reasons, why choosing Android Development to start your programming career is still worth doing from a fresher point of view.Not so long ago there was a moment in my life when I had to decide what I want to do with my career. I knew that I want to become a developer! But wait… there are dozens of technologies and languages, what should I choose? After some research, I decided to become an Android Developer at Untitled Kingdom.

Is it even worth to consider Android Development?

The mobile market has a great time now; it’s vast and still growing. The current number, when I’m writing this post, of Android apps on Google Play store is almost 2.6 million with monthly Android active users over 2 billion! It’s the best time to start developing applications for our smartphones.

So if the number of apps, devices, and users is increasing that means the demand for people who will create them also grows! There are a lot of jobs offers with a variety of opportunities and fairly paid. Let’s think of how many brands you know have published their app in the last two years?

What’s more, mobile apps became an essential part of our life. We can not only get a great job, with various opportunities and fairly paid but also we can have an impact on other people life. Imagine writing an app that will make your own, your family, friends life easier.

Personally, the most impact for me was that I can share the results of my work with people I know. It was great that I could make something that can be useful for everyone around because 85% of devices are using Android OS.

You can begin your Android Developer journey immediately

In general Android Development is easy to start with. Now, when Google announced in May 2017 that Kotlin is an official language of Android Development it’s even more fun. Kotlin is a great programming language with a lot of cool features which has exceptional support. There are a bunch of guidelines, courses, tutorials, articles and documentation that will teach you, step by step, how to code and develop your apps in the best way.

What’s fabulous, you don’t need to spend too much money to check if writing Android apps is for you. All you need to do is having Android phone, download Android Studio and you are ready!

Android Studio is a free but very powerful and friendly environment, it will become your best friend during your developer career. You will see the results very shortly. After writing the first lines of code, you can run an app on your device and here you see the first effects of your work — your own application. Nextly, you can easily release it in Store to share it with the others.

For me, it was great that I was able to see the effects of my work so early, it highly increased satisfaction and ambition to improve myself. After I created the first single screen app I wanted to spend my whole time on improving it, even I knew it was useless — but I’ve had fun with it.

Subscribe to our newsletter and be the first to know about our new articles and e-books. Expect an e-mail from us just twice a month. Don’t worry, we don’t spam.

Going deeper — what’s next if you already see fun with coding?

Let’s say, you already tried some coding and you enjoyed it, maybe you already finished some course or your own project. You know the basics and now you may start to think about the more advanced part of being a developer. How does it look in the Android environment?

Firstly, I have to admit that Android Developers community is great! StackOverflow, Reddit, Medium, personal blogs — everything is full of life and people who like to share their knowledge. What you can see by your own is that there’s a group of experts whose mission is to help other developers understand new features or find better ways of implementing old things.

Due to that huge community, we have a variety of the 3rd part libraries that will help you resolve even uncommon cases that someone previously faced. There’s an incredible number of Open Source things! While gaining experience you will be able to write your own implementations to solve them but it is RxJava2 for example or Dagger which are being used globally.

The biggest milestone in my developer carrier was definitely learning first Architecture Patterns and discovering RxJava2. I felt like I jumped on a new level in my code and after that, everything new becomes easier to learn. To be fair I have to point out that it requires a lot of work to gain those skills but it will pay off for sure.

Developers burnout. How to deal with it when you’re Android Developer?

First of all, it’s very challenging to develop Android apps. There are many things to learn which are a core of intermediate developer, things that you can improve to become better than others or to solve common problems.

You can always start something new because there’s a huge variety of specializations, e.g. IoT, AI, digital health and even more. Great thing is that actually due to community part you can make yourself popular by speaks at conferences or sharing your work as free use libraries. It’s accessible for everyone.

The important thing to know is that, if you decide to switch platform when you wouldn’t be able to find fun with Android anymore then you’ve got a pretty cool scope of potential options thanks to languages that you used until now.

Kotlin multi-platform has great future so you will be able to make apps not only for Android, not only for mobile but also for Web. Also, jump from Kotlin to Swift (iOS) is very easy, you will find it very similar. With Java stack, you can gain knowledge and work with a backend of, for example, web applications.

Last but not least, you can combine technical skills that you gained during your developer career with more soft skills to become a product manager, scrum master, etc. or even start your own business. This is characteristic for almost every programming role but, in my opinion, in Android, you are extremely close to the business side of developed projects.

Yes, I’m not on this level yet but it’s something about what I was aware when I was choosing my path. I heard a lot about it before I started coding and it was an important thing for me. It had a huge impact on my choice.

Of course, everything has its cons (even Android Development)

I would lie to you if I would say that Android Development has an only positive side. Paradoxically, a couple of pros which I mentioned above will also be indicated as cons.

So, for example, I said that it’s easy to start with Android Development — but that means there is a lot of freshers. You need to do some additional work to make yourself special, unique on a job market.

It’s great that there are many devices using Android OS but that also means that as Android Developer you have to support at least most of them, also low ended ones. You have to keep in mind optimization and previous Android versions support. Still, 29% [6] of all the Android devices are using an older version than 6.0 (Marshmallow). What’re OS upgrades and API changes are quite often so you also have to keep on track with all the new stuff.

There are some platform-specific difficulties like Bluetooth or unstoppable changing privacy policy — this one is great because provides more control for a user but as a developer, you have to take care of that. Every platform has things that you could find as issues but you will continuously learn how to get rid of them. 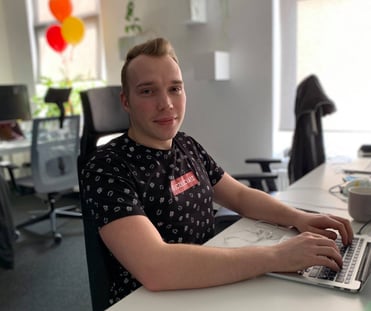 Choosing a career path isn’t easy, it will have a great impact on your future so even when you decide to become a developer there are still many different languages or even specializations to consider.

I didn’t write to convince anyone to choose Android one but to help people who already consider it. I did my choice not so long ago and for sure I can say that I don’t regret it.

Even now when I’ve got a wider scope and I know something more about other technologies I would choose Android at the beginning. It can help you open yourself for new perspectives. If you still don’t know if it’s for you just try it out, it’s the best way.

How is joining the team of Untitled Kingdom through Android Developer’s eyes?

Android Developer with passion and lots of ambition. Hungry for knowledge in both technical and soft areas. A true warrior who fights on the battlefield until the last moment and is not afraid of challenges. #kotlin-first