Since the Internet of Things became one of the main directions of tech development, the vision of smart devices assisting us in our daily chores, work, or free time became real as never before. The prognosis on the development of IoT fills some of us with excitement and concerns the other ones. Working on IoT projects at Untitled Kingdom, we’ve come across piles of IoT misconceptions (some of them frequently asked), which drove us to list the top ones and provide you with a proper explanation.

Are you ready?
Here we go:

Question 1: Is Internet of Things mostly about wearables?

It’s very much not.
Internet of Things is far too often automatically associated with wearables, though, in fact, it’s much more than that. McKinsey Global Institute’s report (2015) listed down the settings in which the IoT makes the most value:

Apart from tiny wearables, the Internet of Things facilitates almost every branch of industry.

Of course, wearables are definitely the sexiest sort of Internet of Things, and also the most personal ones (two of five wearable users claim they feel naked without their devices!). But apart from these tiny lifehacks, Internet of Things plays a much bigger role, providing big machinery and infrastructure for heavy industries or allowing businesses to optimise the work.

The variety of IoT devices makes Internet of Things an umbrella definition covering small everyday-use devices and wearables as well as industrial facilities.

Question 2: Can Internet of Things be secure?

In case of Internet of Things devices, security is quite tricky, but not impossible. The devices are connected, which means they can be attacked remotely. In the same time, the data are stored in the cloud, which creates another attack surface for IoT.

Knowing the examples of data-breach incidents and hacker attacks on IoTs, it’s hard to deny that the possibility of your smart device being attacked is real. But at the same time, IoT security is a high focus for the industry leaders, who are continuously improving their IoT security solutions. Improvements also come on the network side (new security protocols are being established to authenticate sensitive data) as well as government regulations (e.g., HIPAA), which force the IoT industry to protect sensitive data (e.g., medical information).

But hackers attacks is not the only security issue we seem afraid of. Even more often, we are quite discouraged by the vision of our privacy being taken over by huge corporations. We dread to think they may possess the information about each aspect of our lives, from calories consumption and mood changes to the amount of money we spend in a particular shop each month.
The opinions about so-called “Big Brother’s effect” are split.

“The possibilities of such a scenario coming to life are remote since there are several privacy advocates working to make sure our data stays out of a potential Big Brother’s hands.” assumes Ripal Vyas.

On the other hand, there are also those, who accept the very fact of collecting the data but highlight the advantages of it.

“There are many benefits to the consumer on the data being collected on their online behaviour” says Daniel Gutierrez, chief data scientist for Private.me in his correspondence with Christine Hall.

“For example, when shopping at Amazon or Netflix, recommendation systems help consumers find other items that may be to their liking. (…) it helps users get a more personalised experience”- he continues.

What’s undeniable is that the data are collected, as they must be stored for some particular reasons. The controversial part is that, apparently, the safety of confidential data depends heavily on particular company’s policy and security standards.

Question 3: Is Internet of Things too big and complicated for small and medium businesses?

It’s definitely not. The common belief according to which IoT devices are meant to be reserved for big enterprises and corporations is one of the most entrenched myths about IoT. In fact, open platforms and low-cost IoT sensors are one of the most cost-effective options for small businesses (if not the top one…).

The costs of IoT solutions are constantly going down, because of decreasing prices of hardware, wide usage of cloud services or open source tools. But low costs is not the only value of IoT for SMEs. In fact, Internet of Things brings small businesses much more opportunities: 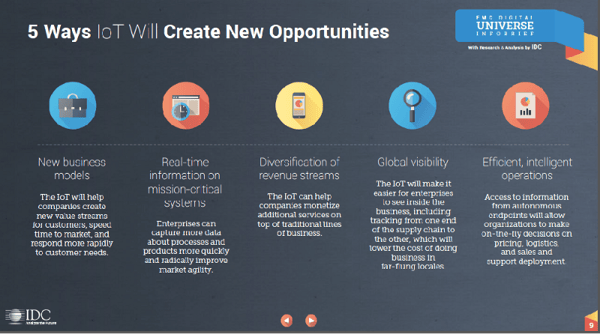 Benefits that Internet of Things may bring to small enterprises. Infographic and analysis by IDC
source

Question 4: Is Internet of Things smartphone-centric?

Only partly. For now, Internet of Things devices designed for personal use are basing mostly on smartphones. But there are some limitations (battery life, costs associated with owning and using them etc) which make smartphones outperformed by other data-sensitive solutions e.g in case of industrial Internet of Things.

According to common prognosis, the Internet of Things will be the main reason for generating 22 times more data traffic by 2020. And, of course, to handle such a load of information, factories won’t probably rely on cell coverage.

There are (and there will be) much more questions and controversies surrounding Internet of Things, most of them basing rather on urban legends than on solid dev experience or profound research. To get a true insight, dare to challenge all of them. And — in case of any further doubts- don’t hesitate to ask our pros about their experience.