How to optimise your app in App Store?

How to survive in the jungle of apps, developers, multitude of regional App Stores and the competition boasting multimillion budgets, such as Rovio and Chillingo? Without any doubt, these companies have the financial means allowing them to purchase TV ads or even organise offline events to promote their games or apps, as was the case with Rovio and its physical version of the catapult for their game mascots. Do not worry, though. Apple’ App Store grants the same exact opportunities to all its developers! App Store does have a few marketing-related shortcomings, but these flaws create equal chances for all publishers, developers or software-houses, regardless of their budget. These cheap, or even free-of-charge solutions are abbreviated as ASO — App Store Optimisation.

ASO, in short, entails the entire process of optimising the apps in a way which allows for it to climb up the search results of application markets — the Apple App Store in this case, as it is the platform I am focusing on here. The higher the achieved result, the more people will visit our product’s page. The increased number of visitors translates into more downloads, which in turn equals a bigger income. To summarise and simplify the issue at hand, one can say that it’s basically a SEO process for mobile apps.

A key aspect of ASO is identifying and recognising your clients — the users downloading the app. I’m not reinventing the wheel when I say that it’s crucial for any industry, but it bears explaining that in the case of ASO the process entails the selecting the right keywords we use to describe our app.

We need to discover the types of keywords our potential clients input into the search engine to find apps similar to our product. Understanding their behaviour will help us adjust to their language and thus conquer the keyword universe.

Another approach to describing ASO is to say it combines innovation, strategic planning, analysis abilities and adapting to the ever-changing conditions of the environment in order to determine the optimal path to improving the percentage of your app to be found organically.

Let’s focus on the four main factors which influence ASO. I have divided them into main factors and additional factors.

What to do as a part of ASO

We know what influences ASO and why ASO must be implemented, which finds proof in statistics, according to which 63% of apps downloaded by the users are found via the search engine. Unfortunately, a lot of developers fail to exploit this fact, which is a shame, as it’s really not that difficult — it just demands a thorough and consequent approach.

Creating and optimising the app’s title.

iOS apps have two titles. The first one is the visible in the Store and which we type into iTunes Connect, while the second one is the “Project name” in Xcode — the title, which appears on the device. We’ll focus on the first one. According to tests conducted by MobileDevHQ — apps, which contain keywords in the title appear in search results 10.3% more often than those, which do not contain them.

Searching, analysing and optimising the keywords

Searching for the right keywords for our app in the App Store is a bit like wandering through the dark. The most important factors are our cleverness and willingness to penetrate the App Store’s search engine with our propositions. This latter can be simplified by using the right tools, such as: searchman.com, mobiledevhq.com or appcodes.com. Each of those tools has their advantages and disadvantages and none of them is as advanced as professional SEO tools, but they get the job done and do exactly what they’re supposed to. They’re also useful for following your direct competition and checking which keywords prompt their appearance in the results and which ones don’t. Once we have our keywords, we mustn’t rest on our laurels. We need to check reports (with the tools mentioned above, for example), analyse and optimise them, because — one, your competition never sleeps and — two, there’s always room for improvement if you want to increase the organic traffic.

The two methods mentioned above are basically the crucial aspects of ASO, which is why you should always analyse your results and work on them. Optimising the keywords is a broad issue (while the searching algorithm created by Apple has a few loopholes), which is why I will further discuss the matter in a series of entries on my Untitled Kingdom blog.

The icon is an essential element of identification. Everyone has a list of good examples as well as tragically bad examples. It’s crucial to remember that people are visual creatures and often purchase with their eyes. This is why your icon should stand out and become a sort of business card of your project. During the autumn edition of TechTalks, Apple used Shazam as an example of a uniquely designed and eye-catching app icon.

There’s a few methods of preparing screenshots for the app. Some use content created by their marketing teams, who perfect every single detail beyond measure and make the screenshots look like great pamphlets 5, while others simply take great screenshots from inside the app. Apple recommends the latter approach and points to Evernote 6 as a good example — not only does the app display good and subtle content, but the screenshots are also localised to more than a dozen of languages (including Chinese). 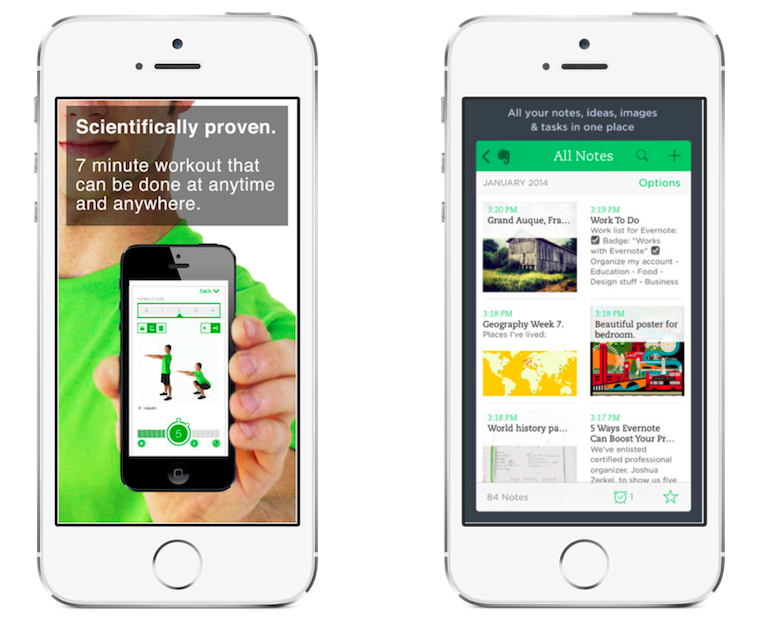 Language localisation is itself a crucial element of positioning the app within the App Store. It even constitutes one of the requirements of submitting the application to become Apple’s featured app. This topic will also be covered in upcoming entries on the UK blog.

Nobody needs to be convinced about the importance of copywriting. It needs to be good, grammatically correct and — ideally — prepared in more than ten key languages (but only if the app itself is also localised!). An example of good copy is once again provided by Shazam, the first three lines of the description of which read: „Shazam recognises music and media playing around you. Tap the Shazam button to instantly tag, and then explore, buy, share and comment. Tagging is unlimited, so use Shazam as much as you want.” These few lines perfectly describe what Shazam does, while the description’s length is perfect for the Store’s mobile version.

There are a lot of factors influencing ASO and a lot of various activities one can undertake for optimising purposes, such as the aspect, which I haven’t described — customer relations, meaning the ratings and reviews of the app on the App Store. This entry is merely an introduction to this broad subject matter, which could certainly fill a lot of blog entries. It’s vital to remember that I’m only writing about the Apple App Store here. Other stores (Google, Amazon, BlackBerry, Nokia) have different algorithms and any optimising activities should be conducted separately, but the core of the approach is relevant to all of them at the same time.